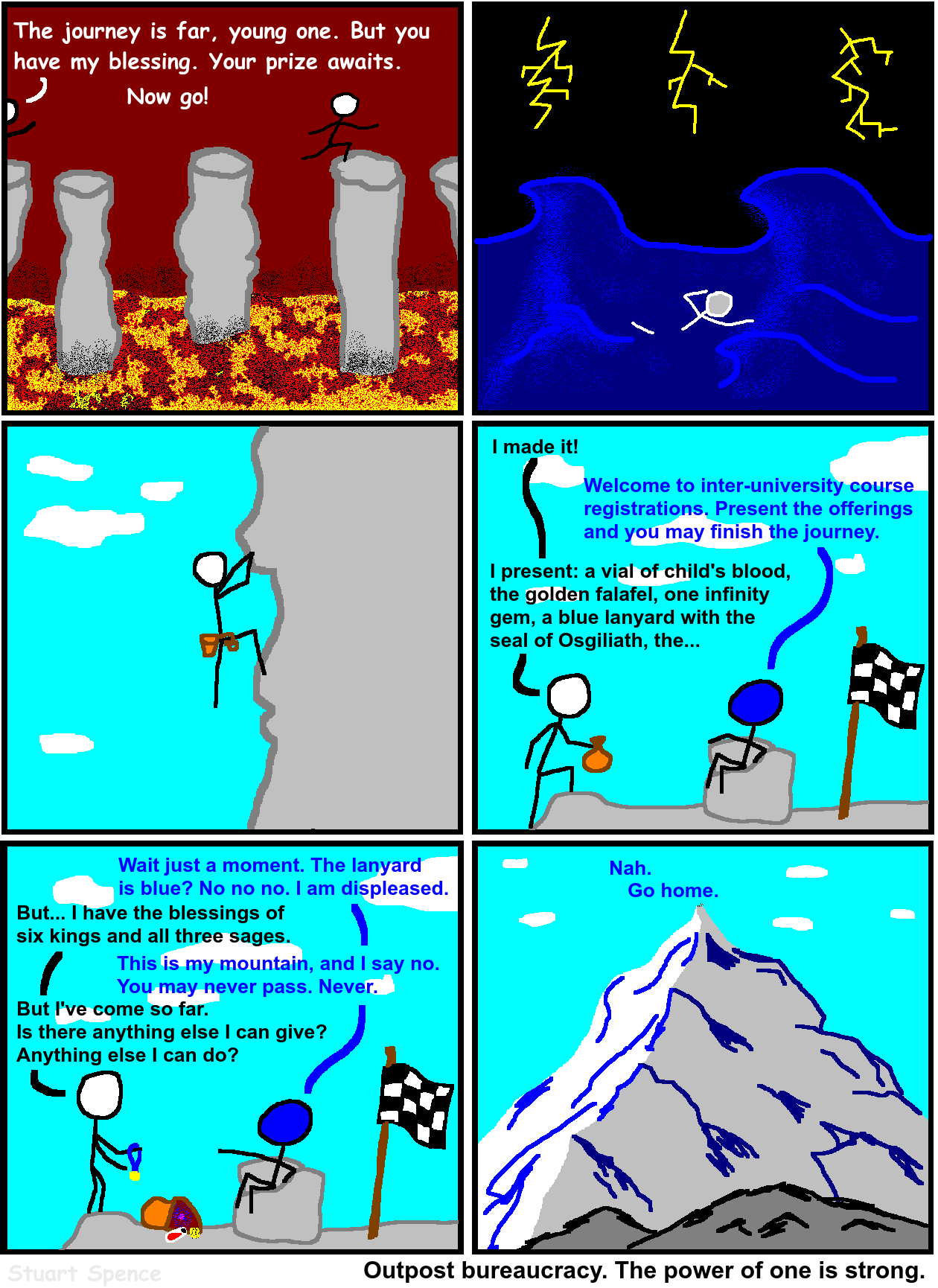 What's the longest journey you've ever taken through university bureaucracy? Mine is probably longer. After five months of appeals, I'm finally able to register at Concordia as a McGill student for an equivalent course. Just like the comic above - I was arbitrarily denied for no good reason after getting approval from six McGill and Concordia administrators. So like before, I employed a tactic to coerce this "outpost bureaucracy" which paid off! More on outpost bureaucracies later. Finally, while this is a story of eventual success, buckle down because I feel the comic above is no exaggeration.

I hope that by telling this embarrassing story university administrators will clear up some of their ludicrous and profoundly convoluted processes. I don't mean to unfairly target school administrators. But lets never forget that some of them are responsible for not fixing this mess. We need to complain more.

The Call to Adventure

In January 2015 I realized that if I schedule my classes right, I might be able to graduate as early as December 2015. Sweet! Lets make that happen! But I needed a diversity themed education course. Unfortunately, the only course overlapped by just 20 minutes and on only one day, with a computer science course I also absolutely needed.

I spoke to Donna after class. I appealed alongside another student who commiserated with me because she too was experiencing how the education department and science department refused to cooperate with each other. Both me her promised to prioritize attendance in Donna's class. We could make this promise because lectures in science courses are typically optional, or recorded, or just terrible. We just needed some flexibility in case there was a test and we needed to arrive 20 minutes late maybe once a month.

Donna's answer? No. Absolutely no. 100% attendance every single day is non-negotiable. Donna seemed like a good professor from her first class, but this was inexcusably inflexible.

She clearly did not care about our schedules or our lives. If I had a test or exam conflict, she was going to be a problem, not a solution. Donna is not the final gatekeeper in my comic, by the way. We've hardly even gotten started.

Refusal of the Call

So I dropped the course. Next I asked advisers for an exemption or if I could substitute a course. I was denied.

One problem with pursuing a multi-disciplinary program is that no department feels you belong to them. I'm completing an arts degree (arts department) in computer science (science department) and education (education department). This is the only way at McGill to get a degree studying education and technology. Fun side note: my arts degree consists of zero arts credits.

Meeting with the Oracle

In the summer the stakes got high. Some of you may know already that I'm extremely fortunate to teach technology topics in a high school during my studies. Since I want a career in education technology, this is fabulous work experience and it's easily more important than any one course I could take at McGill. Unfortunately, for my final fall semester I was left with just two choices:

Teach or graduate. I had to quit my job or take an extra semester for one course.

So I met with an adviser, Grace Wong-McAllister, again. I tried hard to offer alternatives:

The last point is especially fun. She asked if I had previously done relevant course work that could exempt me from this course. I answered: "well, yes. I have a BA in English literature. Maybe half my essays were about race, gender, religion, or cultural diversity." She looked at me like I was a block of mouldy cheese that just spoke to her. "No no no... that won't do." 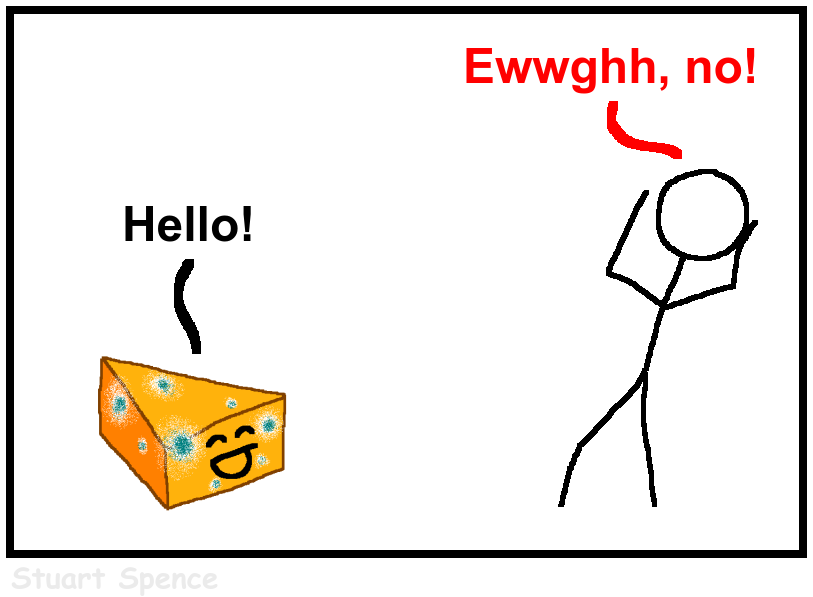 Here's some advice: don't give up. Just because nine people say no in twenty different ways doesn't mean it can't be done. I kept pressing Grace for options. Eventually she thought of something.

An inter-university cooperation group called CREPUQ might let me take an equivalent course at Concordia while I'm a McGill student. Pretty soon this became my very last option. If I couldn't take this course at Concordia, I'd have to quit my fantastic teaching job or take an extra semester for one course. I'm still baffled by the incredible stupidity of this situation. All because of a 20 minute overlap on one day.

Luckily, I had no problems checking Concordia's schedule because I remembered my old login credentials. The course existed! And it fit in my schedule! So I filled out several pages of awkward CREPUQ web forms. My program of study was not an option so I chose a generic option instead and left a note.

Okay. I resubmitted. This time I just lied and said I was an education student.

I could see now that my request must pass through a gauntlet of administrators. The next one in line is only notified once the one above them approves my request:

That means if one administrator diddles, I'm stuck. Well that's exactly what happened. After McGill adviser #2 stalled for a month, I sent them an email. To their credit, they soon woke up and passed the torch.

Two months later, I got CREPUQ approval to register for the course! Victory..?

After re-activating my old Concordia account (not easy) I found that I could not enrol in any courses. I had to contact "enrolment services". They eventually removed that lock.

Next, I hit a "reserve capacity is met" lock. I contacted enrolment services again. They tell me to ask the department. Okay. Calling the department took a few days of trying because their office was moving during the summer. I spoke to an administrator we'll call "Sarah". Sarah is the mountain gatekeeper from the comic. She asked for details by email, I happily sent them. Her email reply, verbatim:

"i verified but unfortunately there are only spots for Concoridaa students."

Okay... I asked when the leftover slots would open for independent students. I gave my story and circumstances.

"sorry but the course will not open up,it is only for Concordia students"

I'd like to take a moment to explain my term "outpost bureaucracy". This is where a lower employee is assigned god-like responsibility over some very obscure task in a bureaucracy. The catch is that it's so obscure that nobody cares about it. For example, approving inter-university independent student requests in one department. It's an outpost, so it's very lonely and there's no prestige. But it's an outpost! So there's nobody around to criticize any decisions. When that lone adventurer comes to the mountain summit, what is the outpost sentry tempted to do? Justify their self-importance by harshly exercising their power with impunity.

So I phone someone else in the department of education. I give my best performance explaining my circumstances and try to elicit sympathy. She sounds optimistic and suggests I send her an email with all the details. Thank you! I send the email. Nothing. Two weeks later I follow up: "Hey? Any news?" No response. It's been months now, still nothing. I phoned and left a message, nothing.

I called the graduate department to see if they can pull some strings for a future student. I spoke to a nice guy, but nope.

I called the Concordia CREPUQ coordinator. Also a nice guy, but nope.

What finally worked was a carefully crafted email. I employed several tactics:

That last point is vital. I was asking the registrar to get involved in a long process and do a lot of work. Nobody wants to do work. Several days later I got a phone call... from Sarah! Sarah who previously denied me entry unconditionally. She was now remarkably kind and helpful. I'm thinking... maybe someone important came to the outpost? 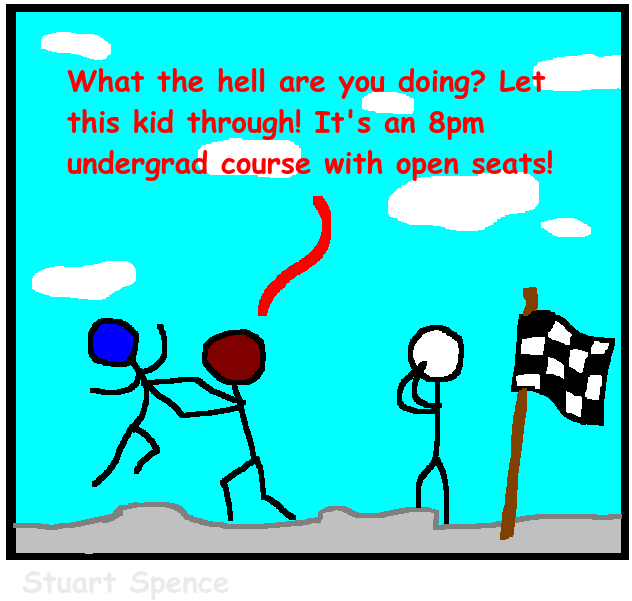 For the sake of completeness, this wasn't the end, just nearly. Sarah said she unlocked the course. It didn't work. I call, no answer. I get an email saying she registered me herself! I check... oops! I'm registered in the wrong course. 445 instead of 454. Chronic dyslexia! Apparently her "director" gave her the wrong course number. Maybe we've identified my saviour.

Finally, I'm now registered for the right course and everything is dandy!

Return with the Elixir

So what did we learn on this hero's journey?

Here's how we used to do course registrations: 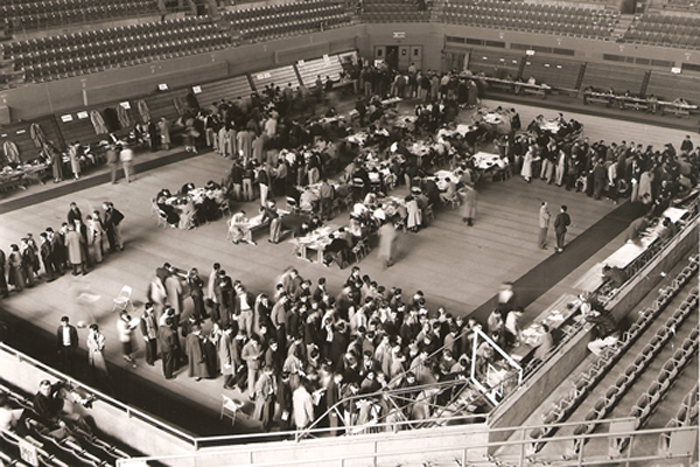 Dear reader from 2015, does this look ridiculous to you? Well registering through CREPUQ (while it worked in the end) seems far more ridiculous to me than the picture above. Solving my scheduling problem required an estimated forty emails, one external organization, six phone calls, and three meetings in person. All spread out over five months and fourteen administrators.

So how should this have worked? How many people should have been involved in fixing my scheduling issue? How about zero.

Don't be a pessimist now! Do you think you could have told these registration administrators from the 1960s that they'd be replaced by a computer? The only difference between then and now, is they didn't have the technology we do.

Course Registrations Should be Provincial

Why the hell do different universities manage their own course registration platforms?It's like schools are paying software companies to make Microsoft Word two hundred times separately. It's like they're saying "but my documents are special because my university is special". Your university is not a special snowflake. Students register for courses in all universities in a fundamentally similar way.

This could be managed centrally by the highest branch of government in charge of education: the provinces. We can pay to get it right, make it flexible, and remove no autonomy from universities. Meanwhile there could be one way to register for university courses for each province. Every university can chip in and they'd save a ton of money by eventually cutting support staff. Here's what I want to see:

One day I might write a post on how to avoid blowing ludicrous sums of money on public software projects. But this post is already epic. Instead, I'll leave you with a comic that perfectly details why course registrations for universities are such a mess - why bureaucracies expand and don't contract. The problem is not technology or funding. We have the technology and working together saves money. The problem is politics: 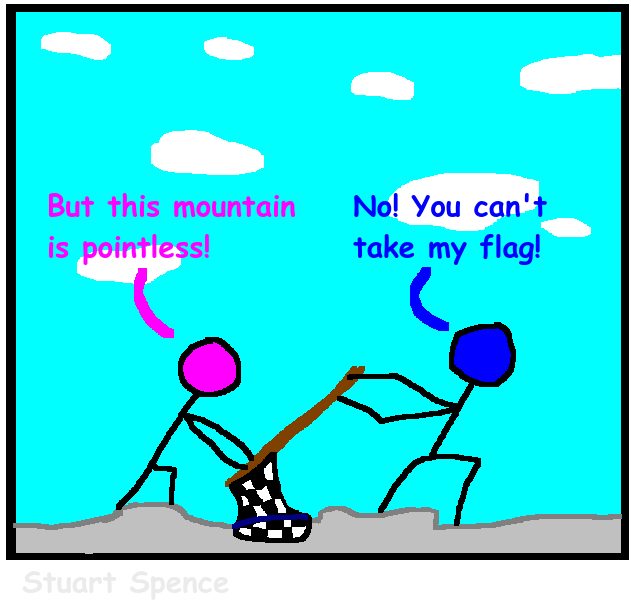