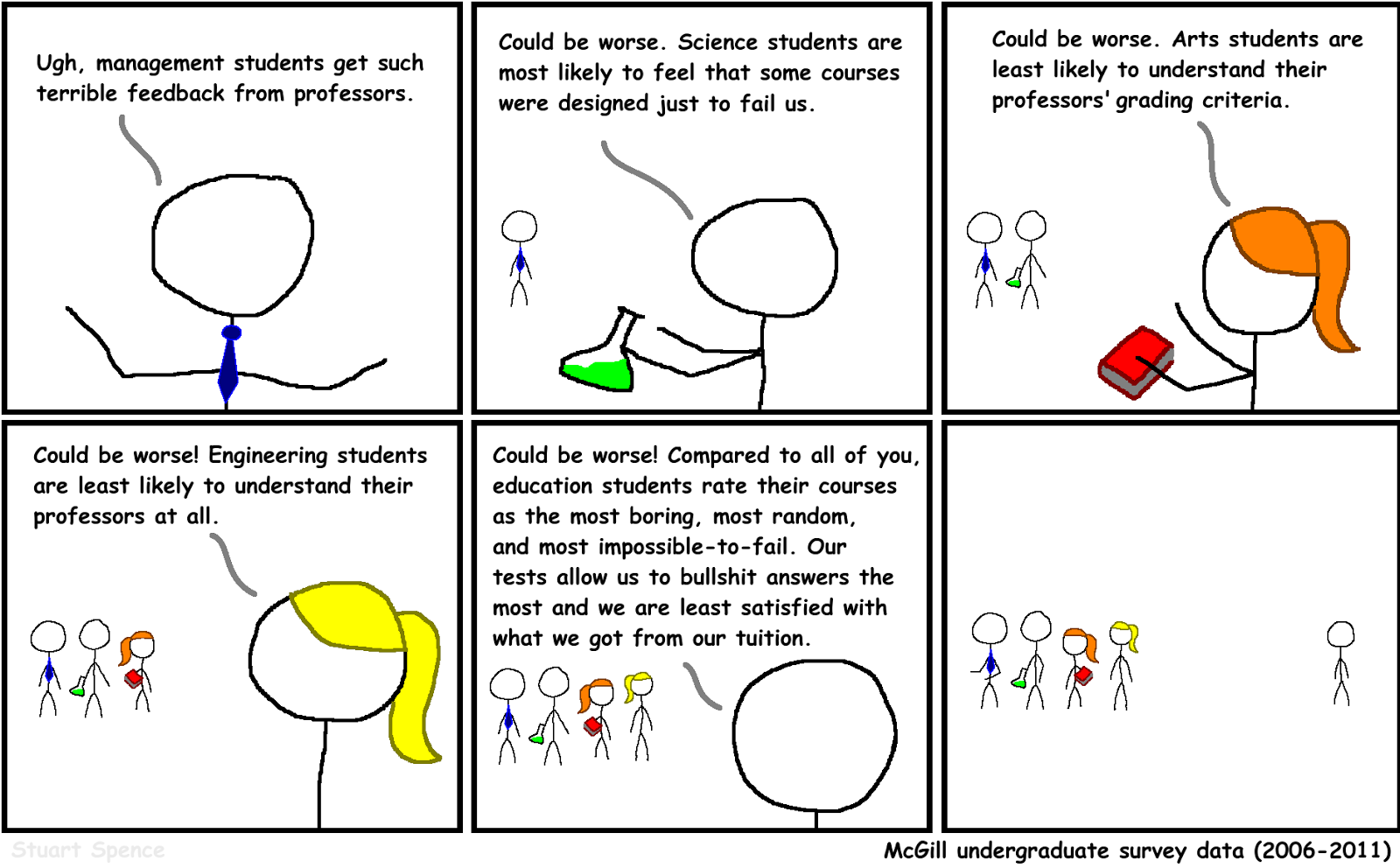 Prepare to be amused and blown away. If you're a university student you may think your department is bad, but McGill's education department is worse. For several years now McGill education students report having the most boring, most random, most tuition-wasting, and most impossible-to-fail courses. This makes me really sad because I care about education a lot. I hope this post helps make things better.

To be clear: this isn't just a bunch of students complaining. This is an entire department of students consistently ranking their courses as the worst. I will present the data, then some solutions. Lets begin!

A previous post of mine got a shocking amount of traffic and generated a lot of discussion. One benefit of all this exposure is that Mike Shortt, who used to work for the undergraduate society (SSMU), reached out to me and gave me a bunch of documents:

If you plan on criticizing the data, I've written a boring methodology summary here.

“There are a variety of interesting courses available in my major.”

McGill students consistently agreed to this statement about 75% of the time. But education students agreed the least at 54%. Education courses are the most boring.

“As I progress through my major, I feel that courses are related and build upon each other in a logical manner.”

Education students scored lowest at 10%, compared to McGill's average of 18%. Education courses are the most random and jumbled.

"Is it possible to get a decent mark in your major through guessing or inventing answers to questions?"

Education students rated by far the worst here. Only 12% disagreed. This was followed by Management at 31% and Arts at 33%. Predictably, science scored high at 56% and so did Engineering at 58%.

Even if I spent the rest of this post trying, I couldn't even begin to convince you how easy it is to guess answers to some education assignments and tests.

“It is very difficult to fail some courses in my major.”

"Professors are easily accessible outside of class time

“Overall, I am receiving good value for my tuition fees.”

So what if education courses are boring, jumbled, pointless, and damn easy? Well, I've known some students who would have made fantastic high school teachers but they were disgusted with the program and left.

Imagine this scenario. In order to become a certified teacher, one must sit in an empty room five hours a day. And You can't do anything at all: you just have to sit there. For four years. What kind of people would we expect to become certified teachers? Would ambitious, exciting, intelligent people tend to go through that process? No (generally). Obviously, the bachelor of education program at McGill is not nearly that bad. But it is bad, and in much the same way.

And certainly some students in the education program are ambitious, exciting, and intelligent. But I believe these bad courses hurt them the most.

Much like security theatre, education theatre is when schools provide the feelingthat students are getting educated, but without actually educating them. Everyone can be tricked: students, professors, tax payers, even nations. But when 95% of students say their courses are "very difficult to fail" and only 12% disagree that you can easily guess correct answers on tests... it means McGill is generally failing to educate its future teachers. It's providing education theatre.

Again - I am generalizing. Some education courses at McGill have truly been worthwhile. But not nearly enough of them. Education students agree here.

As always, it's important to offer solutions to this ludicrous situation.

I'm not a qualified university lecturer, but I could design an awesome course on using 3D game programming to teach math and science. I'm sure there are more people like me and people pursuing higher degrees who also have great ideas. Why not allow anyone to propose experimental courses or workshops? These could be supervised and approved by a professor and worth a credit or two. Aren't we all supposed to be educators in the education department?

I've noticed that education students are at their best when they're giving a presentation they really believe in. Send me a message if you have an idea you'd like to teach.

Consider again how easy it can be to guess or invent "correct" answers on tests. We can see from the survey data that education students believe their department is the worst here. But what about measuring more than just opinion? I've thought of a new way to objectively measure this: the Should-Fail Test.

Lets have students take the final exams of random courses:

I can say from experience that the results would be damning for some education courses I've taken.

I believe that students should usually fail final exams on university material they've never learned. There will be some exceptions, but they should fail on average. If should-fail students do well, then the test is broken or the course is "education theatre".

This test may be a great way for McGill or the ministry to audit courses and programs. And now I'm dreaming, but maybe schools and programs all across Canada could have a "should-fail" rating associated with them?

“Man will become better when you show him what he is like.”

Unfortunately, the documents I reference are hard to find and according to Mike Shortt the project was discontinued:

"Due to the terrible continuity problems that afflicts all student organizations, SSMU stopped doing these (reports) once I graduated."

I think this project is one of the most important services SSMU can possibly offer. The undergraduate society should endeavour to do a survey of this scale every year.

I think these numbers really give a lot of legitimacy to student complaints - maybe that's why it lost support. I've already written about how McGill's administrators ignore feedback. This survey must have made that harder to do. We need a strong student government to bring it back.

"The main thing that (the reports) show is (1) most stereotypes about the various faculties are true; (2) things don't really change much at McGill."

Many of my stereotypes were confirmed. And yes, there is little sign of change. But reversals are possible. Take this for example:

“I am proud of my accomplishments at this university.”

While McGill students on average agreed only 25% of the time, education students agreed 40%! But this wasn't always the case. Before 2011, education students actually scored the worst here, not the best. So what happened? I don't know, but reversals are possible. 40% is still a long ways off from good, but it's a huge improvement.

Thanks for reading. And as always: if you care, complain.

On Saturday I'm presenting at Concordia's Graduate Symposium on Education! Whoa! I'll be talking about my experiences teaching high school math and science through 3D game design this past year. Just for 15 minutes though. But still!

It's a free event at Concordia in Montreal. It's all day Saturday and I'm presenting from 3-320. If you're interested you should probably register: